Find your next favorite piece in our WebApp! Login here
Music history Composers

I will close now. It is growing dark...

In February 1854, Robert Schumann attempted suicide by jumping off a bridge over the Rhine river. The following is an account of this tragic event and the final years of one of the greatest composers of all time.

It was during the 1830s that Robert Schumann began to show the first signs of depression and mental illness that would, some 20 years later, lead to his suicide attempt and consequent placement in a sanatorium in 1854. It was also in this time that, due to a "numbness" of the middle finger in his right hand, Schumann let go of his dream of becoming a virtuoso pianist and embraced the life of a composer and music critic.

In 1834 he founded the Neue Zeitschrift für Musik, a music magazine that would quickly become a major platform for reviewing, discussing, and promoting new music. Through this journal, Schumann helped launch the careers of composers like Chopin and Brahms. This was also the time when he composed some of his most famous works such as the Davidsbündlertänze Opus 6, Carnaval Opus 9, the Symphonic Etudes Opus 13, Kinderszenen (Scenes from Childhood) Opus 15, Kreisleriana Opus 16, Fantasy in C major Opus 17, and others.

The title of this post "I will close now. It is growing dark..." is the exact final sentence found at the end of Schumann's last letter before his suicide attempt. What follows is based on the diary of Ruppert Becker, a member of the Düsseldorf Orchestra and friends with Schumann.

In his diary, Becker writes on that day how Schumann was constantly speaking about exquisite music he heard in his mind. Here is how the composer described it:

"The sound is generally that of distant wind-instruments, playing particularly beautiful harmonies"

The first time Becker witnessed this was when they were both at a restaurant and Schumann suddenly put away a paper he was reading and mentioned this "heavenly music" he was hearing at that moment.

His condition only worsened from there and, just a week later on February 21st, Becker writes in his diary:

"The blow of which I could not trust myself to think has fallen; Schumann has been out of his mind for some days."

The last time Becker saw Schumann was on Friday the 24th. During that encounter, the composer describes a vision where Franz Schubert (who had died 26 years before) appeared and played music for him:

"During the hour I spent with him ... he told me that Franz Schubert had appeared to him, and had played him an exquisite melody; he had, he further assured me, written this down and composed variations on it."

Three days later, on Monday the 27th, at around noon, Robert Schumann walked out of his house. Wearing only a dressing gown and felt slippers, he made his way to the closeby bridge over the Rhine river in a 12 to 15 min walk.

On the way to the bridge, Schumann was greeted by a merry crowd celebrating the main day of the Rhenish street Carnival, which coincidently happened on that same day.

He would have certainly blended in with his outfit and, probably for that reason, did not attract much attention.

The walk was short and he soon arrived at the river. This is what the bridge was like back then:

The original bridge no longer exists, but it would have been located somewhere close to the current Rheinkniebrücke in Düsseldorf. Here is a map of what that walk would have looked like: 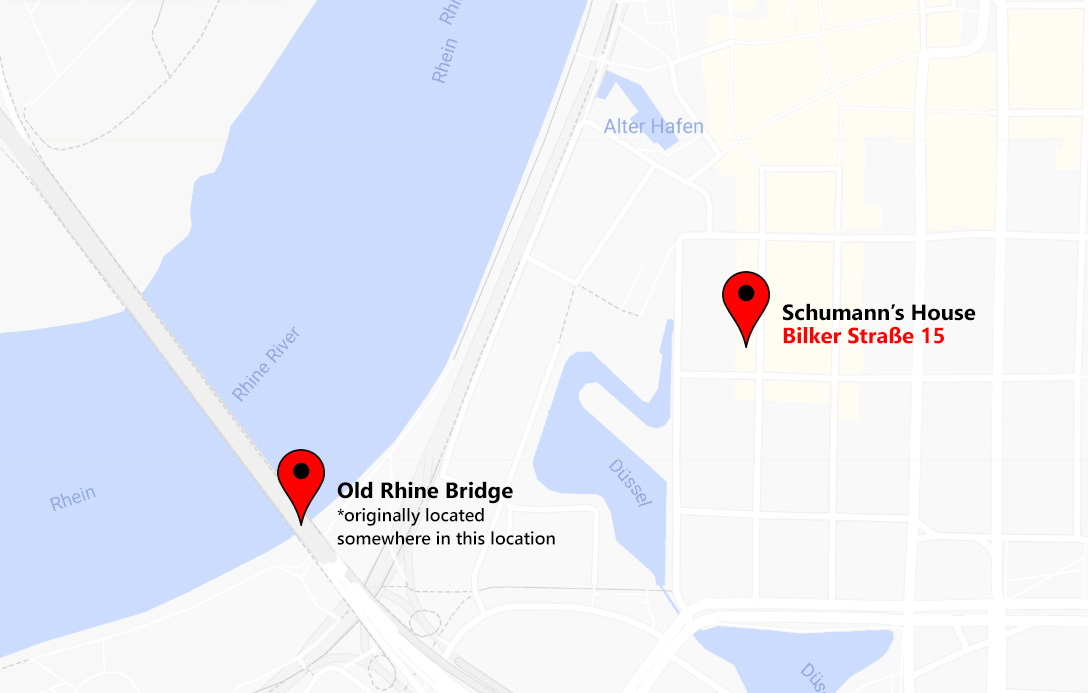 Upon arriving at the bridge at midday, Schumann was asked to pay the toll required to cross over to the other side. Having no money at that moment, he paid the toll with a silk handkerchief. That alerted the tax collectors at the bridge, who in turn called on a nearby fisherman to keep an eye on that strange man in pajamas who had just made his way through the bridge.

As the fisherman slowly followed him from the riverbank, he could see the mysterious man walking towards the middle of the bridge and suddenly making a stop. The man turned to the river and, without much hesitation, jumped over into the cold icy waters below. The fisherman promptly took his boat over, rescued him, and brought the confused man to the shore.

The fisherman's name was Joseph Jüngermann and little did he know that that man was a famous artist, pianist, and composer called Robert Schumann. For this, the fisherman received a lifesaver medal, now kept at the Robert Schumann House in Zwickau, Germany.

Schumann then returned home, accompanied by the same cheering crowd who, of course, was unaware what had just happened.

His condition quickly deteriorated and, just 5 days later on March 4th, he was admitted to a mental hospital in Bonn at his own request and the advice of his physicians.

There, Schumann spent the last two years of his life. Letters from this period show a man immersed in memories of the past, seemingly unaware of his condition. On September 14 of the same year, he wrote to his wife Clara asking about their kids. In this letter, he asks if they were still playing Beethoven and Mozart, along with detailed recollections of their travels in the past:

"Tell me more details about the children. Do they still play Beethoven, Mozart, and pieces out of my Album for the Young? Does Julie keep up her playing, and how are Ludwig, Ferdinand, and sweet Eugenie shaping?"

"Was it all a dream - our tour in Holland last winter, your brilliant reception everywhere, particularly at Rotterdam, and the torches carried in our honor? You played the E flat concerto, Beethoven's sonatas in C major and F minor, Chopin's studies, Mendelssohn's Songs Without Words, and my new Konzertstück in D in such glorious fashion."

Robert and Clara exchanged letters during this period as his doctors prevented her from seeing him, until days before his death. Robert Schumann died in the mental hospital on July 29th, 1856, at the age of 46.

Release stress with the power of music

The Romantic period in a nutshell

Who is the craziest of them all?

The 10 most famous piano makers of our time

Best classical piano pieces to play during the winter holidays