Played by great composers like Mozart and Bach, the harpsichord has been forgotten and gradually disappeared from the mainstream musical scene with the rise of the piano.

Want a heads up when a new story comes out? Subscribe here

When we think about the majestic music of Bach or the crisp touch of Mozart, our minds always go towards seeing the composer sitting at their instrument while playing their music. And if you ask, most people would tell you that that instrument is the piano. But it's not. One of the instruments they played is called harpsichord and was widely famous and celebrated during the Baroque and Renaissance eras. The harpsichord is also a keyboard instrument which looks very similar to the modern piano and can be referred to as its ancestor.

What is a harpsichord anyway?

The harpsichord is a stringed keyboard instrument with a shape similar to a grand piano, but generally longer and narrower. The strings are plucked with a small piece of material called plectrum which is held in a narrow slip of wood called a jack attached to the key mechanism. 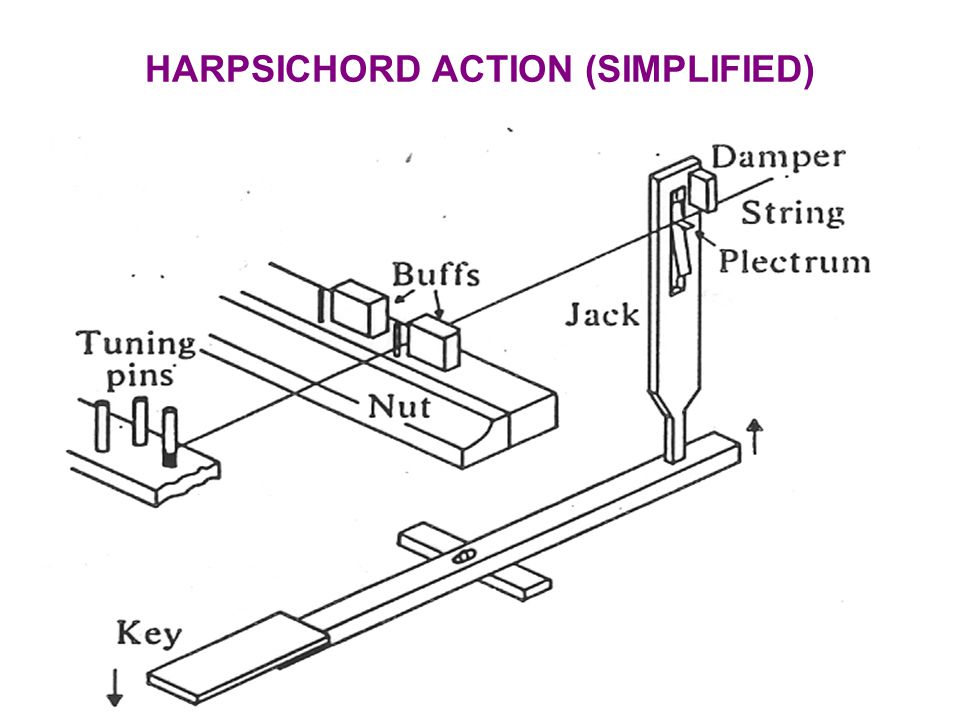 This mechanism is very simple and straightforward but there's a drawback to this simplicity: no matter how hard you press a key on a keyboard, the sounds emitted by the instrument will just be the same. Let's think about this for a moment, it means no real way to create tension with a louder sound or to transmit calm through a soft melody. The principles of Romanticism that our modern culture took so dear, cannot be achieved with the harpsichord.

Now, the modern piano achieves a deeper dynamics and depth of sound in the mechanics of how it strikes the chords, with a series of little hammers, like so:

To summarize, let's list the main differences between the two instruments:

The harpsichord was invented in the 12th Century and became popular during the Renaissance and Baroque periods. The piano was only introduced in the 18th Century and become the Classic and Romantic periods' main instrument. Harpsichord was mostly played by musicians like Rameau, Scarlatti, Couperin, Bach, Mozart, and more, while the piano became the symbol of Beethoven, Chopin, and Liszt.

You probably remember the scene from the movie "Amadeus" where Mozart plays and entertains the audience at a party (we like to point out that the movie is a fictionalized Mozart's biography, which speculates on an imaginary rivalry between Salieri and the young talent). Can you guess the instrument he played? Well, the harpsichord of course!

The piano has seven octaves while the harpsichord only comes with five.

The harpsichord keyboard keys are slimmer, meaning that each note has to be played separately. This is the reason why most of the music composed for harpsichord is sharp and should be played with a staccato sound. Mozart's pieces are usually fast and crisp mostly due to the nature of the instrument.

You can sustain a sound for longer with the piano but you simply can't do the same with the harpsichord. This relates back to the jack mechanism and its limitations with the sound emitted by plucking the string. With the piano, striking a string without immediately damping it allows the sound to resonate and persist for longer time blending with other sounds if other keys are pressed subsequently.

While playing the piano, you have full control over the volume of sound produced, meaning you can either play soft or loud depending on the way the key is pressed. A harpsichord player does not have such control. No matter how hard or soft you press, the sound will always have the same volume.

The piano was invented by Bartolomeo Cristofori, who was unsatisfied by the lack of control that musicians had over the control level of the harpsichord. The instrument was first called "clavicembalo col piano e forte" (literally a harpsichord that can play soft and loud noises) and later simply "pianoforte" which was eventually shortened to "piano".

It's relevant to note that early pianos didn't really provide that much of an edge over the, by then sophisticated, harpsichord. When J.S. Bach played on an early piano at the Silbermann's shop (a famous organ manufacturer), he was not well pleased. He is said to have complained about the pinched sound in the high notes, and the heavy touch required. Later, in 1747, when the composer was 62, he appeared better satisfied with the instrument, which had been improved in the meantime. By the 19th century, more sophisticated pianos had emerged together with few generations of incredible musicians like Beethoven, Chopin, Schumann, Schubert, and Liszt. A new Romantic style of music emphasized emotional depth and expression which could only be achieved through the dynamism of the piano. Its sound could fill large concert halls and blend greatly with the rest of the orchestra.

Let's listen to the same piece, the Chromatic Fantasia and Fugue in D Minor by J.S. Bach, played in the harpsichord by Karl Richter:

...and in the piano by Andras Schiff:

PianoLIT Team
Where pianists discover new pieces and find inspiration to play only what they love.
READ NEXT

Tchaikovsky vs Brahms: a story of music and rivalry

Enjoy our latest posts directly in your inbox

Subscribe now and receive the latest news, stories, ideas and much more right in your inbox!

Ops, we're having some problems...

If this issue persists, please let us know at contact@pianolit.com